We had the opportunity last Thursday evening to take part in a fantastic event hosted by the Guelph Outdoor School and featuring bird language master Jon Young. Jon spoke to a packed high school gym about his plan to build a continent-wide culture of nature connection by teaching and modelling the lessons of bird language. Sound crazily ambitious? It probably is. But Jon is such a down-to-earth speaker and casually magical storyteller that by the time the evening drew to a close, he had us hooked.

Jon studied anthropology, and has done some very interesting and influential work ‘reverse engineering a culture of nature connection’, as he puts it. He grew up being mentored by the famous American tracker Tom Brown, and later lived and studied with indigenous people on three different continents in an attempt to abstract the common features of their land-based cultures into a single model that he could teach to cultures who had lost touch with the land they lived on. Again, crazily ambitious, but kind of cool.

The Thursday night event contained almost all the elements he’s identified as those that build robust, connected communities: music, storytelling, food, theatre, inter-generational contact, and of course, lots of time for mixing and mingling. The one thing left out was real, raw contact with the natural world, and that’s why I had decided beforehand to register for his weekend-long Bird Language Intensive workshop at Kimbercote Farm. 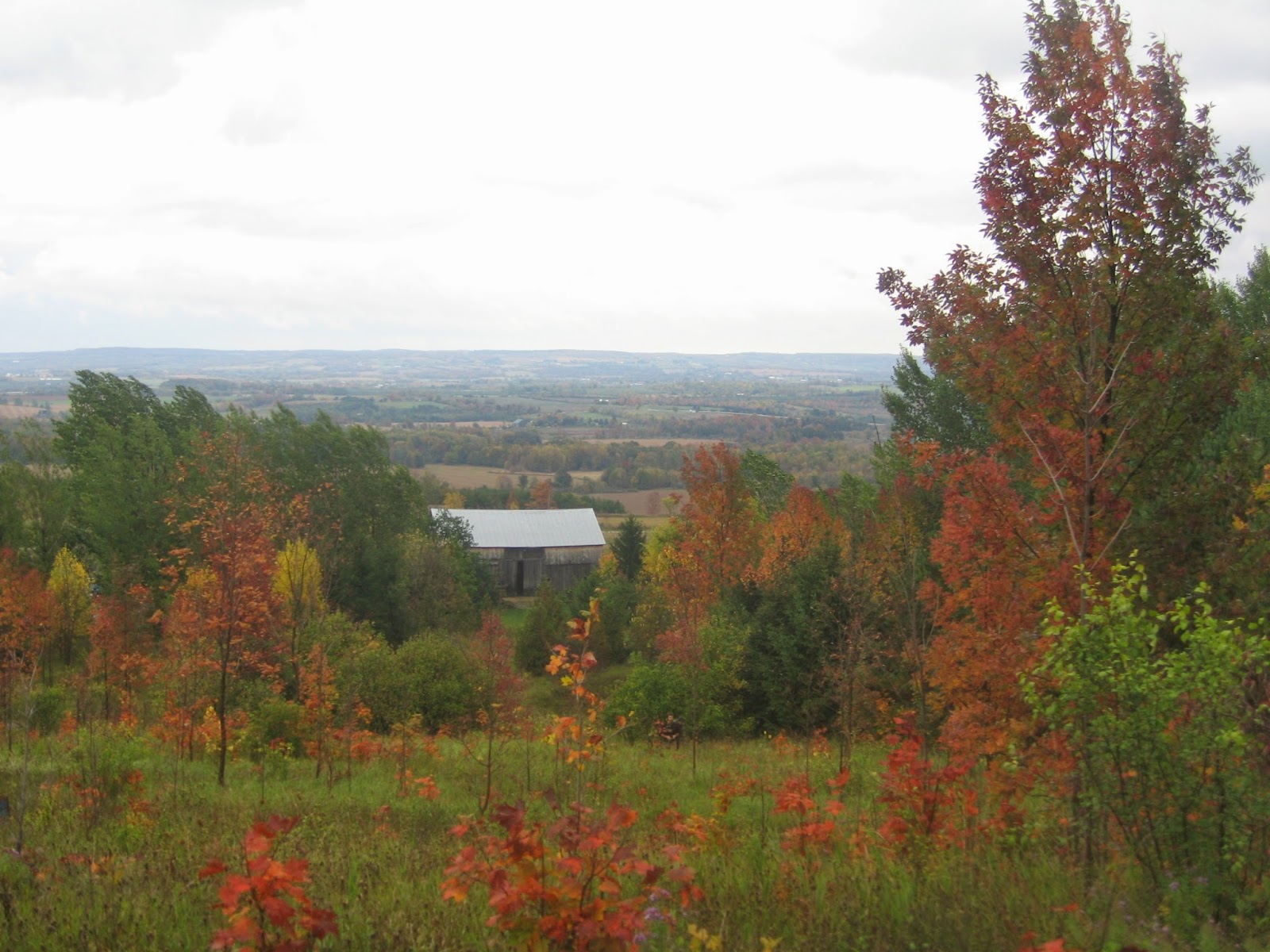 Kimbercote is a swathe of re-foresting farmland near Heathcote, Ontario, home to Sticks and Stones Wilderness School, where I’ve visited and taken other courses previously. The image above is a view of the beautiful Beaver Valley, with the Kimbercote barn nestled among the trees. The sloping meadow dotted with maple saplings in the foreground is where my fellow workshop participants and I crouched in the chilly rain before sunrise each morning of the workshop, pencils in hand, eyes and ears wide open. After forty-five minutes, we’d meet in small groups to debrief and map our observations, then pool those observations to form a master map and an overall story of what went on in the meadow during our sit. 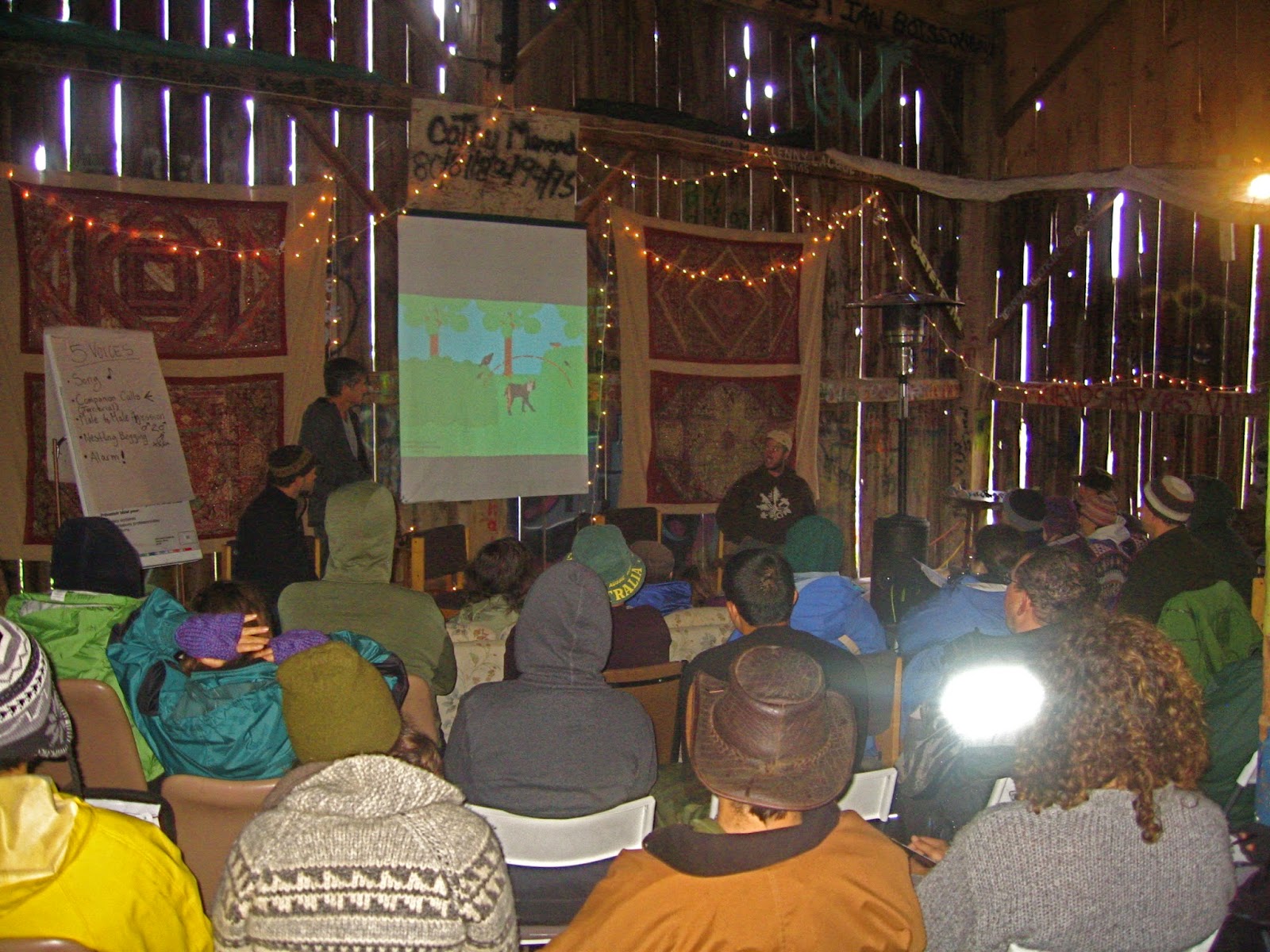 Here’s where the magic came in. Whether or not we knew the names of the birds producing the tweets and chirrups we noted, Jon was able, with his own observations and questions, to draw out from the assembled group a precise picture of where the hawks and other predators had been moving on the land, even though the hawks themselves were silent and sometimes invisible. For example:
WORKSHOP PARTICIPANT: This afternoon we heard the robins alarm and saw them jump a few feet higher on their tree. Then the hawk appeared, flying down the hill, and there were short alarm calls all along the line of the cedars as it passed.
JON YOUNG: Why didn’t the robins dive for cover?
PARTICIPANT: I guess they weren’t as worried by this predator as they would have been about other dangers.
JON YOUNG: What did the robins do after jumping up to a higher branch?
PARTICIPANT: They kept very still, facing… up the hill, away from the hawk.
JON YOUNG: Ah, posting to sentinel. What do you think they were looking at?
PARTICIPANT: Another hawk?
JON YOUNG: You can bet anything you like on that.
The ‘seen’ hawk turned out to be a Norther Harrier, which hunts by soaring fast and low and dropping suddenly on whatever isn’t wise enough to detect it coming. But the broad-winged Harrier isn’t agile, so a robin can evade it by getting only a couple of feet above its flight path. Much more dangerous to a songbird is the Cooper’s Hawk, which can dive and swoop and even play some nasty tricks on its much smaller prey, like hunting in the wake of a larger, more noticeable predator like the Harrier. Jon’s detective skills and years of experience listening to birds hammered home the message again and again throughout the weekend: nothing in nature is random. Everything birds and animals do means something, and if you can learn to quieten yourself and pay attention to their signals, not only will you be able to see more wildlife, you’ll be able to read powerful meaning where before you perceived only random noise. Jon understands the difference between being told something important and being taught it, and it’s that kind of inquisitive, experiential learning that we want to bring to KW Forest School.

5 thoughts on “Listening for the Birds”